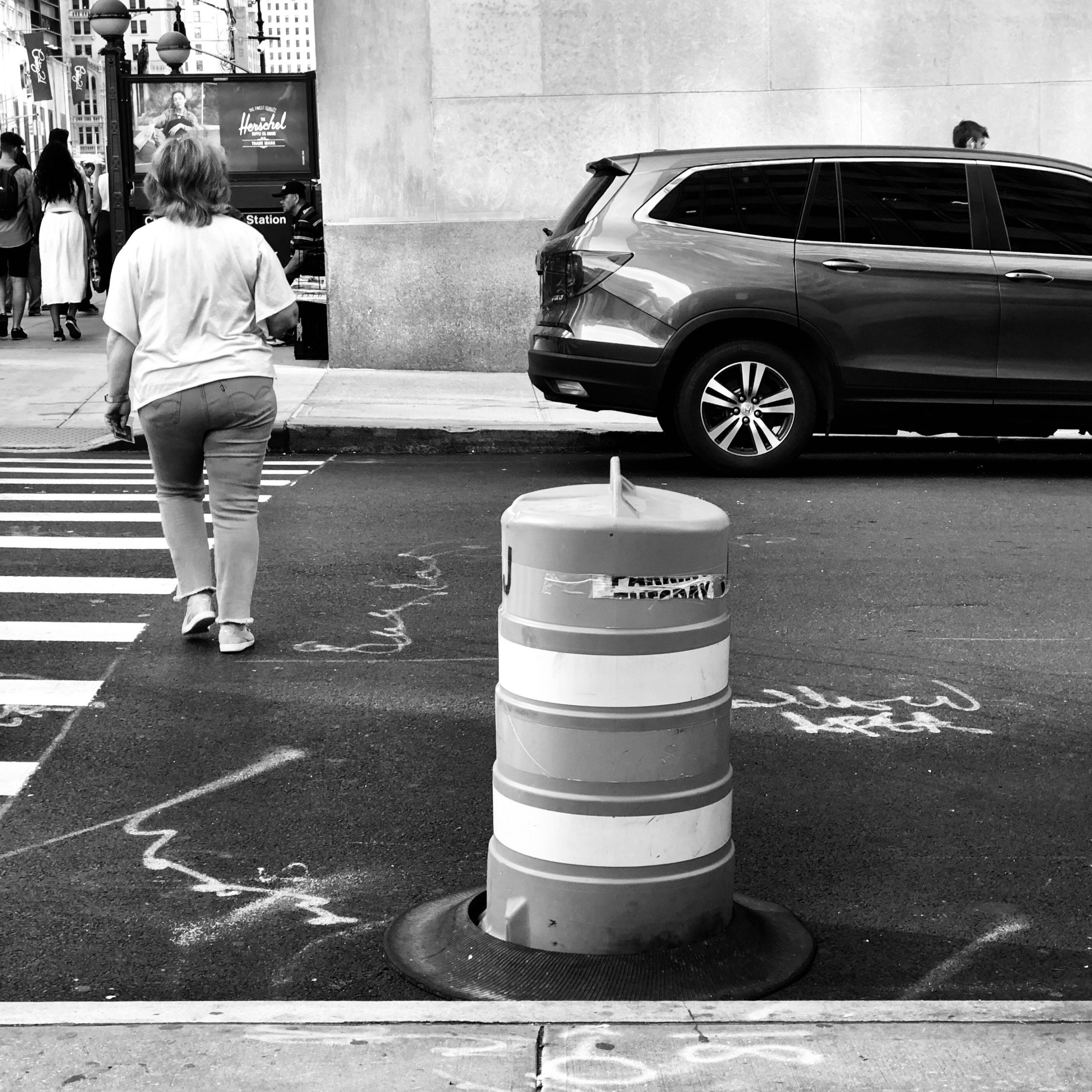 Medium-sized cylinder, with four ridges, and top handle; predominantly orange, with reflective stripes horizontal to the ground. Often found with a round rubber base. Predominately found in poor physical condition, and with additional markings denoting ownership.

Throughout the five boroughs.

Oh man. Orange barrels. A topic package every suburban television station rolls before Memorial Day. If there was a piece of street furniture that was most like a cockroach, then the Orange Barrel would be it.

These ubiquitous plastic control devices are everywhere. I mean everywhere in NYC. Since we seem to continually rip up our streets year round, we never seem to get a break from their presence.

That doesn’t mean they aren’t useful – their utility is the main reason they proliferate like cockroaches, often staying on the street well past the end of the construction job.

They are descended from steel oil drums which were painted orange, and filled with water or sand. Needless to say, the damage done to a vehicle from a large oil drum, not to mention the difficulty of deploying and removing such heavy device, cried out for improvement.

Often composed of virgin plastics, and quickly discarded, the Orange Barrel has material impact on the environment. The rubber base is often recycled truck tire side walls, diverting them from landfills.

Yet the orange barrel is just a symptom of larger climate and environmental impact. Besides the carbon cost of production and transportation to the job site, Orange Barrels generally are placed at job sites which are loud, dirty, dangerous, and often have environmental contaminants (lead, asbestos, etc).

NYC does a poor job coordinating utility and repair work, if at all. Part of this is the complexity of our modern needs: the electrical, data, natural gas, steam, communications and telephone, Subway, and all other things which we put underground makes coordination difficult. And each of those services are often provided by different organizations, of varying degrees of regulation. Not to mention NYC has only recently created a master GIS to track all the utilities.

Besides the daunting task of keeping track and coordinating new and renewal construction, each entity is incentivized differently, with the City the worst culprit. The City earns fees for every linear foot of pavement disturbed per length of time.

Just coordinating work and shifting incentives could go further in reducing the needs of the Orange Barrels, and the root climatic and environmental impact.