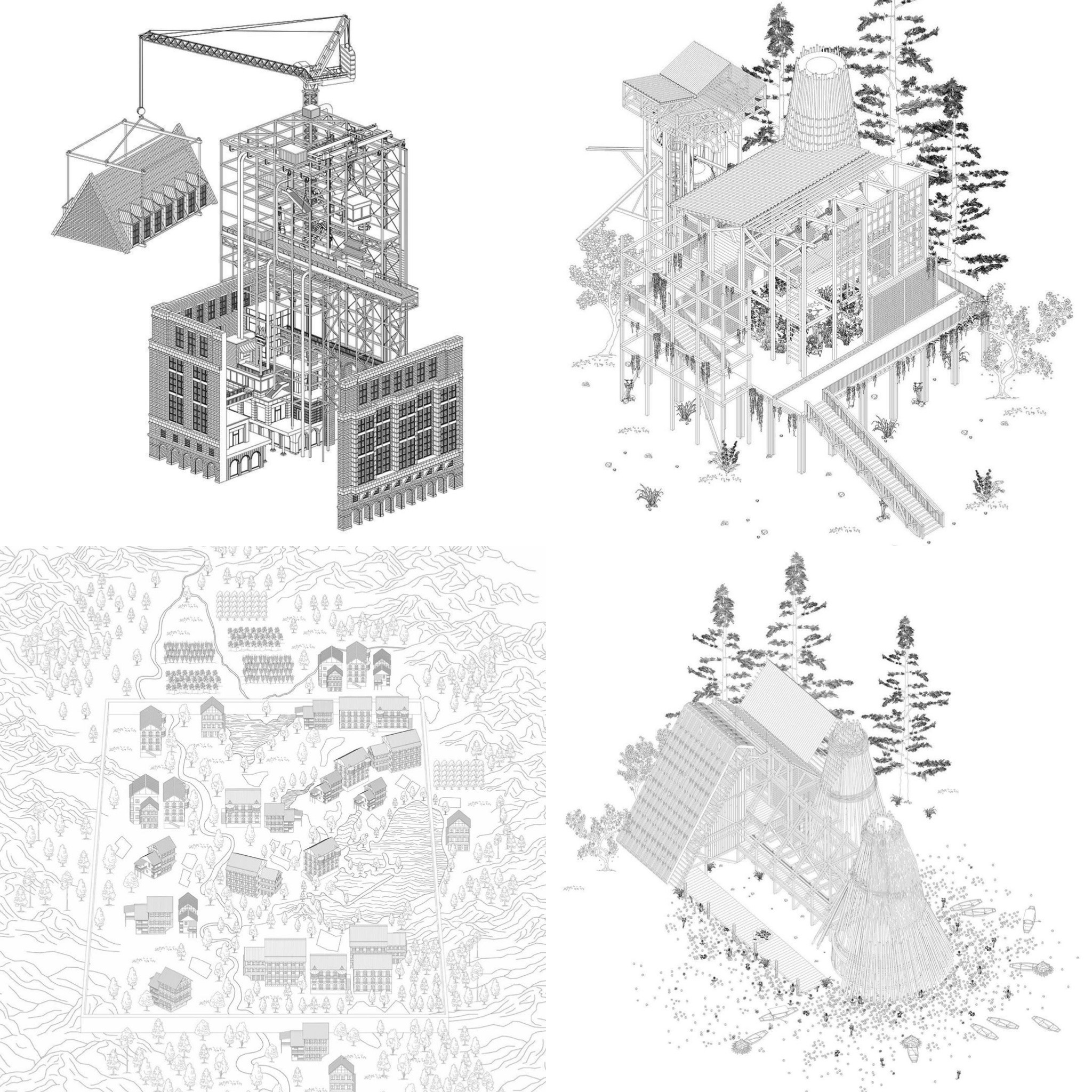 These are short interviews with designers, manufacturers, artists, and residents who use the tiny bits of urbanity we generally call street furniture. This interview was conducted over email and edited for clarity.

Hi, I am Arinjoy Sen. I’m currently a student of architecture at the Bartlett School of Architecture, UCL. I completed my undergrad in Manchester and I’m from Calcutta, India. My focus ranges from the politics and aesthetics of architecture/space to the instrumentalisation of spatial agents in socio-cultural and political phenomena. My first year of Masters focused on critically relevant political events and conditions within the Indian landscape. Namely the ongoing socio-political crisis within the highly conflicted and militarized region of Kashmir, and the demystification of a specific politico-religious movement through the spatial agents intrumentalised within it. Currently, I’m looking into subaltern studies and trying to create a dialogue between that and architecture. I’m not sure where this will go, but this is where I am currently.

Typology is a very important topic of discourse, in my opinion, because exploration reveals an incredible amount of history, socio-political, and cultural processes behind it. Typological studies of not only a city but even a simpler and more everyday spatial device like that of the corridor, allow for the demystification of societal and cultural processes. But when it comes to the confrontation of typology with the city, I feel like it is one of the very first steps towards understanding the urban fabric.

Typology is inextricably linked to the city and its built apparatus, but not only limited to that – I know I’m repeating myself here, but it is also inextricably linked to the socio-political and cultural processes that lead to the specific urban fabric. Typological studies help us understand and design for specific places; this is important to me because I am really interested in the idea of an architecture situated and rooted in place. This is obviously getting more and more tricky because of the global condition, but also therefore becoming more and more important in my opinion.

This was actually a very strange moment for me. As a kid, I was always quite interested in gaming. I wanted to become a software developer but at the same time I had an artistic/creative inclination. This was my decision till almost the very end of school. I think midway through my final year, I don’t know why, but I really got into architecture in the most basic sense of simply looking at “pretty” buildings. But for some reason, I had a very last moment realisation that I really wanted to study architecture. It got quite radically situated in my mind in a very short period of time. I felt like I couldn’t possibly study anything else. I am extremely glad for that last moment realisation, because now I feel like I wouldn’t know what to do without it.

“Paradise on Earth” was one of the first drawings that I had made at the beginning of the project in a bid to explore the idea of the wall as a state of exception.

The term “Paradise on Earth” is an epithet given to Kashmir, for its natural/scenic beauty, by the Mughal rulers prior to the British colonization of the country. Now, Kashmir is one of the most militarised regions in the world and definitely the most conflicted region in India. The nature of the partition of India during its independence contributed to the rising tensions between India and Pakistan over the region of Kashmir. The tensions kept rising and there was the Kargil War as well in 1999.

But recently, a year ago now, after some events of conflict in the region which arguably almost brought the two countries at the brink of a war, the Government of India pulled out a dubious move of its own: stripping the region of Kashmir of its semi-autonomous status and militarizing the region even more. But what is missing from all these stories, are in fact the people of Kashmir who are stuck in a perpetual limbo negotiating between death and democracy, the military and militants, India and Pakistan.

They live in a constantly precarious state with no voice of their own, precisely because the government has made sure of this. This project was a way to address this socio-political condition dealing with identity politics, cultural processes and the possibility of a form of autonomy within and against the State. Going back to the original question, the wall then became a starting point towards the exploration of a state of exception which ultimately manifested in the form of a productive landscape of common(s).

Peter Eisenman. I might not always agree with his design strategies but I highly regard him more for his academic and theoretical positions. I believe that Eisenman is an incredible thinker and theorist. His deconstructionist ideas are able to question contemporary thought processes and give rise to interesting and often radical approach to architectural discourse in both built and unbuilt form.

Key reading: Contrasting Concepts of Harmony in Architecture: The 1982 Debate Between Christopher Alexander and Peter Eisenman. Also available as a PDF download. This debate is…sizzling. I swear there is an audio recording of this somewhere, but can’t for the life of me find it.

Naming a favorite piece of public space actually a very difficult question for me. I’ve always failed to satisfactorily answer this type of questions. Difficult, firstly because I have unfortunately not visited many buildings and therefore I cannot possibly talk about a space properly or with better subjectivity without having experienced it. Secondly, because I think it is generally difficult for me to choose favorites in anything, especially due to the fleeting nature of opinions and subjectivities.

I love alleyways. I feel like alleyways reflect to an extent an uncompromising and unedited version of a city where everyday life unfolds in its innermost nuances. Alleyways for me, are a type of incubator of social processes. I appreciate that its only limited to certain types of socio-cultural processes but nonetheless, I see a very revealing characteristic/personality of the city in its alleyways.

Spatial Typologies attempts to create a new grammar for the city — one rooted in the struggles of the people of Kashmir, who are in the midst of an identity crisis. This gave rise to hybrid spatial typologies which re-interpreted local-traditional construction methods, crafts and skills in order to maximize the utilization of local skills and resources, but also provide a way to involve the community. These spatial typologies are conceived to facilitate a circular economy through their construction, maintenance, and development. The common(s) framework established within the project employs this circular economy as a way to utilise locally available skills and resources to create a state of exception within and against the State – towards a form of autonomy and sustenance.

The other aspect of the spatial typologies was to confront identity politics. The typologies are characters within a narrative; characters with personalities that develop over time. Kashmir has a deep tradition of storytelling, where the storyteller recites folk tales passed down through generations. The landscape of Kashmir is dotted with stories of streets, trees, lakes, and shrines that exist – real places animated with stories, turning them into landmarks and imbibing them with an emotion and identity. Similarly, the narrative of each typology-building-character is rooted in the struggle of the people of Kashmir. They construct an identity of a people that has forgotten its meaning; a people living in identity crisis. Buildings act as a mask in the story of the city, its narrative waiting to be activated and developed by the user.

Cities lack a grammar rooted in its place in terms of their urban fabric, especially developing metropolises. The global aspirations of cities tend towards a generic gentrified urban fabric which only works towards the further development of capitalism. Metropolises increasingly tend to embody the kaleidoscopic forms and existential instability of capitalism as a formal apparatus. The first problem is that cities have a lack of spaces where the political proper unfolds — spaces of dissent – because these spaces are being systematically erased by the policies and regulations of the global capitalist elites.

The second problem goes back to a loss of a grammar and identity of the city; this is not an aesthetic appeal. A generic urban fabric which can plug into any space or place means that the networks and processes that the act of building do not benefit or work towards the development of local resources. Instead, buildings benefit global capitalist industries which also work against the environment. Architecture rooted in its place would tap into locally available skills and resources and work towards the development of the community as a whole. Whereas, urban built fabric and real estate are primarily looked at nowadays only in terms of financial prospects; thus, cities now, only aspire to work towards a global economic standard where the factory extends its dominion to the entirety of society. Thus reducing society (labour) and built fabric into economic devices.

Thank you to Arinjoy Sen for taking time for this conversation. You can see their work on Instagram at @arinjoy.sen.