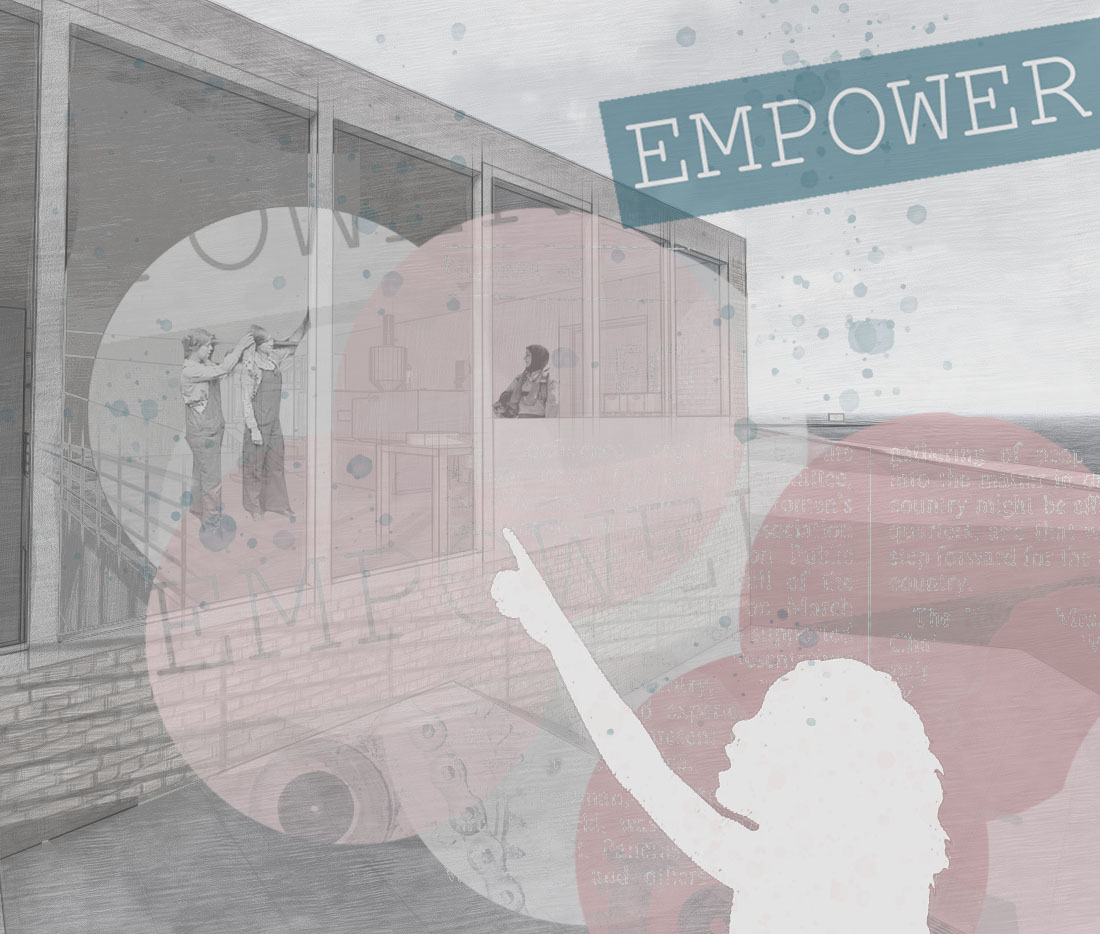 Hello, my name is Grace Thomas and I am a third-year undergraduate architecture student in the UK. I fell in love with architecture after walking around the Sagrada Familia by Antoni Gaudi in Barcelona. I was inspired by how much detail and meaning building parts could have and the effect a building has on people’s thoughts and feelings.

When I fell in love with feminism is a little hazier, I think I have always been a feminist.

When I came to university that my ‘feminist agenda’ changed. Instead of working to combat micro-aggressions thrown around at a boy’s school, I wanted to put feminism in architecture. It was at the beginning of my second year when I started to consider this: we had to try and define our style of architecture and feminist is exactly what I wanted architecture to be.

To be honest, I did not know if feminist architecture could be accomplished.

Feminism is the ‘the theory of the political, economic, and social equality of the sexes’. I believe architecture is one of the discourses that can show that feminism isn’t just a theory.

Architects can be the action that rebels against the patriarchal built environment that we currently live in. Incredible books such as Living in a Man-Made World- Gender Assumptions in Modern Housing Design by Marion Roberts and Feminist City by Lesie Kern are brilliant at demonstrating how architecture has been used to oppress women and keep them trapped.

My feminist architecture is about creating buildings and spaces that are built for everyone. I don’t design just for the six-foot male and I try to include everyone’s needs in my specifications: an accessible stair, an increased number of accessible bathrooms, and trying to reduce crime on the site by 24hr programming of the building.

I think it is imperative to clarify that feminism does not and has never meant anti-male. Feminism (and any of its discourses) aims to dismantle the patriarchy and the system which disadvantages women. Patriarchy also disadvantages men in many ways – feminism aims to support men as well. Men get less time off work for paternity leave and are not encouraged by their peers to display their emotions, contributing to higher rates of suicide in males than females.

Therefore, in my work I try to design for everyone. That is what feminist architecture is for me. Designing so that everyone has equal opportunities for success. Furthermore, in countless parts of the world feminism is still considered taboo and people get shamed for calling themselves feminists. Thus, it should be no wonder that I am trying to promote the movement that gives half the world’s population a voice and that tries to achieve gender equality.

Your projects is centred around education and the local context. How is this important?

Globally there is a lack of women in STEM and in Margate where my project was set, there are not many great post-16 centres let alone specific STEM ones. As a result, to add to the feminist goals of my project I opted for a STEM college for women. Looking back the programming did help to market my building as feminist. But there are so many ways you can design in a feminist manner that does not involve specifying that the building to be for women only!

Every piece of architecture must be built into the local context. If there is not sufficient prior knowledge of this then I strongly believe that is one of the main factors why buildings do not work or are not received well by the community. Therefore, I took multiple site visits and scoured the internet and online books for as much local history and views on the current situation of the town as I could. This enabled me to focus on what the town would need from my project and how previous architectural builds such as the Turner Contemporary have been received.

Who will tell your story?

So much of the canon of architectural history is (for lack of better terms), old white dudes. How does that affect feminist space/architecture?

During my first year, the only architects we looked at or were told to look at were old white men. I think that to design feminist spaces, architecture students must make the conscious effort to explore other architects and how they have designed for equality or have they? It should also be a big focus of architecture schools to radicalise their teaching and include more of the forgotten architects. These include those who are female, black, from ethnic minorities, marginalised communities, immigrants, the LGBTQ+ community and more. We also need to be teaching our future architects how to design for the specific needs of these communities, just having one day about designing for people in wheelchairs is not enough by any means.

I will be completely honest and say I have not researched the decolonization movement yet. I understand that I need to and I have started to broaden my feminism to practice intersectional feminism. Can We All Be Feminists? – Seventeen Writers on Intersectional Identity and Finding The Right Way Forward for Feminism By June Eric Udorie is a fantastic resource that introduces and discusses the different intersections that feminism needs to start covering. I will use this book as a jumping-off point to look more into the issues of colonialism and how it affects the built environment. Moreover, I am looking to see what I can do to ensure what I design in a way that does not repeat the mistakes of history.

Can we all agree that Ray Eames and Denise Scott Brown totally get overlooked? What forces need to change to bring equity and equality?

Oh yes, we can 100% agree on that. Amid all my male-centred architecture teachings I did have one professor who talked a little about how much more of the credit should lie with the female behind some of the big male names. So that was very refreshing to hear.

I would maintain that it is the architecture schools who need to make the most change. If we keep teaching about the same white men all the time then future architects won’t know how much wonderful diversity is out there. That will be a big factor in bringing about equity and equality, especially in the future. For now, we need more appreciation and celebration of the roles that women played in designing the current built environment.

Let’s spread awareness of what happened to Ray Eames and Denise Scott-Brown or even Marion Mahony Griffin or Eileen Gray or Lily Reich or Charlotte Perriand. The list of over-shadowed women goes on and these are the most famous of the group. Think about how many women’s stories we just don’t and will never know about.

Typology and the city

Modern housing design and typologies since the 1800s in the UK particularly, have consistently reinforced the need for the nuclear family with the man as the breadwinner. It was the housing policies set by the government that unapologetically forced anyone not married into low-quality housing and slums. Even what the government would classify as “the deserving poor” had to be families who did not drink and smoke, and had a loyal, clean and tidy housewife to maintain the property. Single women and other minority groups were priced out of decent standard council houses by design.

The housing boom in the 1950s to the 1970s further reinforced these patriarchal ideas and now this is the housing stock we are left with today. So, whilst the archaic policies are gone, the framework from a male dominant society is still there. Furthermore, we need more diversity in our policy-making rooms so that marginalization and discrimination in the housing market never happen again.

To bring change to the profession we need to step outside our comfort zones. Whilst it may be easy to copy elements from precedents that have seemed to do well in the past, we need to think: who are these building schemes benefitting and are they as great at the predominantly white male architecture profession claim to be? We need to ask a more diverse range of people their opinions before trying to fit a square shape through a circular hole, so to speak.

If we look at Mies Van der Roe’s Farnsworth house. This is a celebrated historic design and one I got told in architecture school was a brilliant example of modern housing. But if you ask the owner and resident of the house Edith Farnsworth, we see a very different side to the story. She said that she did not like the invasion of privacy she got from all glass walls and always felt like she was being watched, a feeling most women know too well and do not want to feel in their own homes. In an interview, she said:

“The truth is that in this house with its four walls of glass I feel like a prowling animal, always on the alert. I am always restless. Even in the evening. I feel like a sentinel on guard day and night (…) Mies talks about his ‘free space’: but his space is very fixed. (…) Any arrangement of furniture becomes a major problem, because the house is transparent, like an X-ray.”

Thank you to Grace Thomas for their time. To see more of their work, check out their instagram @thefeministarchitect and see their final year presentation – they also gave us further Reading for anyone interested in feminism or feminist architecture: